In Songahm Taekwondo, our belts reflect a member's proven level of competence and

(just as importantly) the progression of colors reflects an inner journey that never truly ends.

Each belt achieved is truly an accomplishment worthy of respect.

The moves that make up each form are available for study by clicking on the form names below.

White Belt - Songahm #1
"Pure and without the knowledge of Songahm Taekwondo. As with the Pine Tree, the seed

must now be planted and nourished to develop strong roots."  The student has no knowledge

of Songahm Taekwondo and begins with a clean (pure) slate.  Purity is often signified by the color white.

Orange Belt - Songahm #2
"The sun is beginning to rise. As with the morning's dawn, only the beauty of the sunrise is seen rather

than the immense power."  The beginner student sees the beauty of the art of Taekwondo but has not

yet experienced the power of the technique.  Orange is found among the many colors of the sunrise.

"The seed is beginning to see the sunlight."  The student begins to understand the basics of Taekwondo.  The sun appears to be yellow.

Camouflage (Camo) Belt - Songahm #4
"The sapling is hidden amongst the taller pines and must now fight its way upward."  The student begins to realize his/her place in the world's largest martial art. The student must now begin to spar in order to promote in rank.  Camouflage (greens) is used to hide among the trees in the forest.

Green Belt - Songahm #5
"The pine tree is beginning to develop and grow in strength."  The student's technique is developing power. The components of the basic techniques are beginning to work in unison.  As the pine tree develops, it sprouts green pine needles.

Purple Belt - In Wha #1
"Coming to the mountain. The tree is in the mid-growth and now the path becomes steep."  The student has crossed over into a higher level of Songahm Taekwondo. The techniques, poom-sae (forms), and level of gyeo-roo-gi (sparring) becomes more difficult, creating a "mountain" that must be overcome.  Mountains are often depicted as being purple.

Blue Belt - In Wha #2
"The tree reaches for the sky toward new heights."  Having passed the mid-way point, the student focuses his/her energy upward toward black belt.  The sky appears as blue.

Brown Belt - Ghoong Jung #1
"The tree is firmly rooted in the earth."  At this point the student has mastered the basics and developed deep roots in Taekwondo.
Brown is known as an earthy color, such as dirt.

Red Belt - Ghoong Jung #2
"The sun is setting. The first phase of growth has been accomplished."  The first day (the period of time from white belt to red belt) of growth is coming to an end. The physical skill has been developed but lacks control; therefore, physical and mental discipline must now be achieved.
Variations of red are found among the many colors of the sunset.

Red/Black Belt
"The dawn of a new day. The sun breaks through the darkness."  The previous day has ended, giving way to a new dawn. The student must begin a new phase of training; that of being a black belt.  The red is the sun (in a sunrise) as it breaks through the black of night.

Black Belt
"The tree has reached maturity and has overcome the darkness... it must now plant seeds for the future."  The color black is created when all the colors of the light spectrum have been absorbed into an object. That object has "taken control" of the colors and retained them. If one color was to "escape", the object would no longer be black but would appear as that color. The student has mastered the nine geup (grades) of Taekwondo. He/she has "absorbed" all the knowledge of the color ranks and overcome or "mastered" that level or training.  The colors of the spectrum are bound together and are not reflected off an object, resulting in the absence of color which we call black.

I will practice in the Spirit of Taekwondo,
with courtesy for fellow students,
loyalty for my instructor,
and respect for my juniors and seniors.

I shall live with perseverance in the Spirit of Taekwondo,
having honor for others,
integrity within myself,
and self-control in my actions. 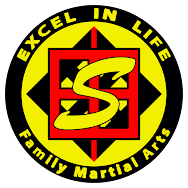 Formerly - A Plus Karate 4 Kids - same owner and instructors, just a new business name that reflects our commitment to those of all ages with an interest in martial arts.